Band collar: Also known as a Mandarin collar or Oriental collar. This type of shirt is almost collar-less but features a band-shape which goes around the neck. A band collar is buttoned close to the throat and is usually black-studded. Ties and bow-ties are not usually worn with band collars.

Casual suit: For beach weddings or outdoor weddings, a tuxedo may not be necessary. Pale coloured suits with lightweight shirts are usually more suitable for casual weddings. Depending on the formality of the wedding, the groom may or may not wear a jacket with a casual suit.

Cufflinks: Small pieces of jewellery which decoratively fasten the cuff of the sleeves on a suit shirt.

Cummerbund: A black satin sash, featuring upward facing pleats, which is worn around the waist. Grooms wearing a shawl collar jacket at a black tie wedding may wear a cummerbund. A cummerbund is not worn with a waistcoat.

Double pleats: Pants which feature a ‘mini pleat’ half way between the pleat and the pocket. Double pleated pants allow for more space to move, around the pelvic region (perfect when you hit the dance floor at the reception) and are well suited to shorter men as they give the appearance of elongated legs.

Lapel: The two parts of a suit jacket which are folded back onto the chest, revealing the undershirt, waistcoat and tie.

Morning suit: A suit which is worn during daytime weddings. A morning suit jacket usually features a more rounded cut as well as two buttons on the back of the jacket. A morning suit needs to be well-fitted and therefore, a custom-tailored suit is usually necessary. A morning suit is worn with a long-tie, not a bow tie.

Notch lapel: A lapel which features a deep V-shaped notch, cut out near the collarbone. The notch is usually cut a third of the way into the top of the lapel, on both sides. This is the most common type of suit lapel.

Oxford shoes: The type of shoes most commonly worn at a black tie wedding. Oxford shoes are classic patent leather lace-up shoes. They are also usually black and highly polished.

Peak lapel: A peak lapel is almost the opposite of a notch lapel. Whereas a V-shaped notch has been cut out of a notch lapel, it is as though a V-shaped piece of fabric has been added to the peak lapel. This V-shape points slightly upwards to provide a peak. Peaked lapels are quite formal.

Pocket square: A piece of fabric (usually linen, cotton or silk) which is folded and displayed in the front jacket pocket. The colour of the pocket square should match the bride’s outfit or the colour of her flowers in some way.

Shawl lapel: A shawl lapel is featured on tuxedo jackets and not morning suits. Unlike notch lapels and peak lapels, it does not feature any breaks but is, rather, curved continuously from the collar to the jacket button. A shawl lapel is extremely formal and is usually made of a shiny, black, sateen fabric.

Shirt studs: Decorative jewellery which is fastened to the buttons of a suit shirt. The groom’s shirt studs should match his cufflinks.

Single breasted jacket: A suit jacket which features a single row of buttons. This type of jacket is suitable for most body types but especially taller, solidly built men.

Turndown collar: A turndown collar is a wide spread collar which folds downwards and nestles behind the jacket’s lapels, allowing for the best bow tie display.

Tuxedo: Traditionally, a tuxedo was a suit which was only worn at very formal evening events. However, these days, many grooms and groomsmen wear tuxedos at daytime weddings, too. James Bond is the ultimate tuxedo-wearer of all time.

Wingtip collar: A collar which turns down toward the front of the shirt and hides the edges of a bow tie, if worn. For this reason, a wingtip collar is best worn with a long-tie rather than a bow tie. 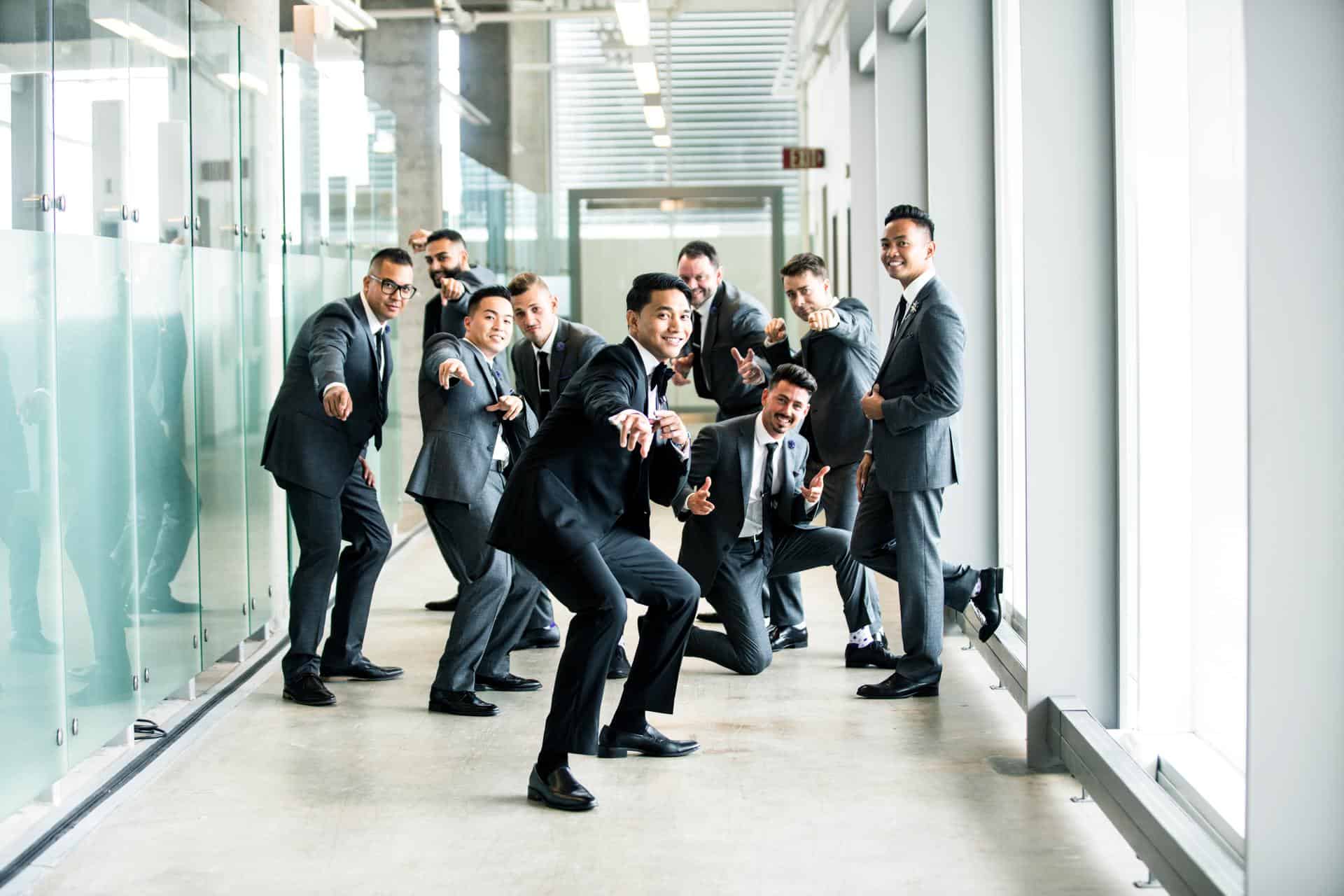 Duties of Your Best Man And Groomsmen: A Checklist

The Quick and Dirty Guide to Classic Footwear